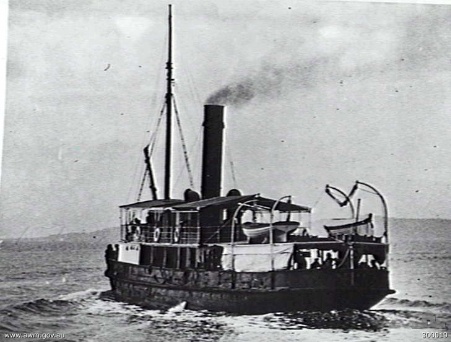 Upon establishment of Queensland’s Maritime Defence Force in 1884, the colonial government ordered two gunboats and a torpedo boat to equip the new force.

However it was considered that, given the number of ports along Queensland’s 4,400 mile coastline, additional ships would be required to supplement those vessels.

Originally designed as a tug, during its construction, the ship was purchased by the QMDF and was converted for military service. She was fitted with a single 5-inch gun allowing her to operate as an auxiliary.

In service, HMQS Otter performed tender duties as well as conducting patrols. Following Federation she was transferred to the Commonwealth Naval Forces. She was paid off in 1906.

Subsequently sold into civilian hands, she was  requisitioned by the Royal Australian Navy during World War 1 to serve as an examination vessel. She was returned to her owner on cessation of hostilities.

In World War 2, Otter again served as an examination vessel, until December 1940 when she returned to private operations on Moreton Bay.