The historic pioneering with the new Marconi wireless telegraph , was a combined operation by the Department of Posts and Telegraphs and the Navy.  The Naval Commandant, Captain W.R. Cresswell (afterwards Rear-Admiral and known as ‘father’ of the Australian Navy) was already interested in wireless telegraphy when, in 1902, Mr C.E. Barton (an Electrical Engineer) gave a lecture and a small demonstration at the technical college.

The Gayundah, fitted with a high bamboo foretop mast for transmission, proceeded down the Bay.  In St. Mary’s churchyard at Kangaroo Point was a shed with Wireless Telegraph equipment and alongside it a tall mast, height 130 feet, with the aerial wire for receiving.

1986 Brisbane White Pages (cover). An artist’s impression of Gayundah moored below the Kangaroo Point cliffs at the time of these trials. The grey buildings on the riverfront are the old naval stores, while St. Mary’s church is seen on the cliff top. 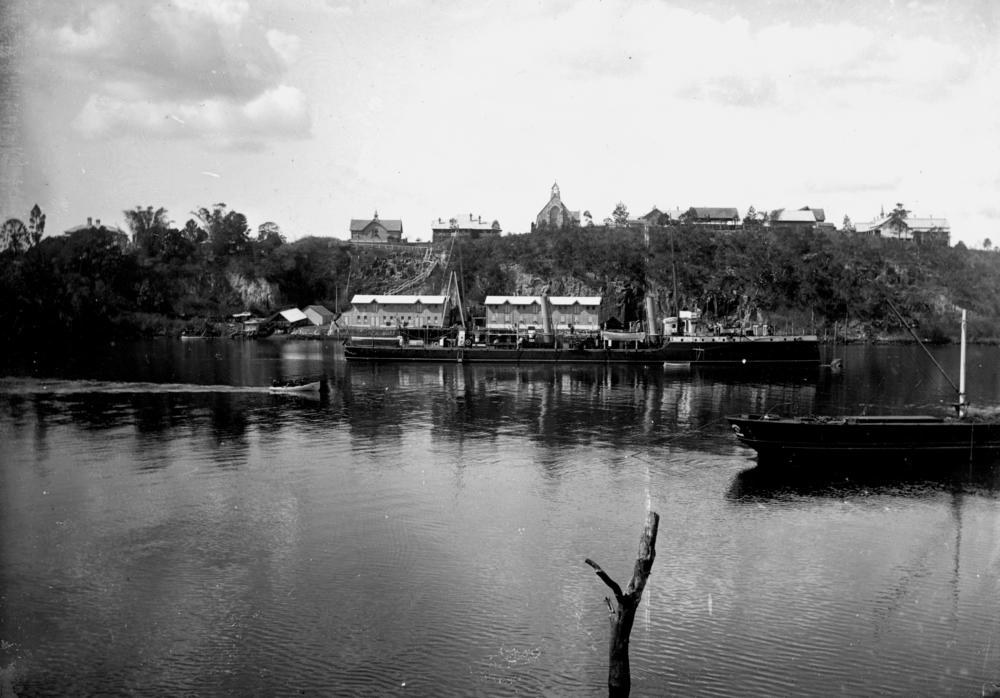 The Naval Stores at Kangaroo Point, Brisbane, beneath the Kangaroo Point cliffs. St. Mary’s church is prominent on the cliffs above the right-hand store building. A long ship is passing in front of the stores. Photograph circa 1896. John Oxley Library, Image #166641

The first message received from a ship at sea to an Australian wireless station was transmitted by the ‘Gayundah’ in Moreton Bay to the wireless station at Kangaroo Point on Thursday 9 April, 1903.

‘Gun drill continued this afternoon and was fairly successful – blowing squally and raining – prize firing tomorrow.  Marconi insulators were interfered with by rain but easily rectified and communication since has been good.  Good night.’

On Friday 10 April, 1903 the “Courier” reported that the Gayundah and Paluma were exercising in Moreton Bay and (quote):

“Last Evening the following message was received by pigeon post from our special representative on board the ‘Gayundah’:-

“ ‘Gayundah’ and ‘Paluma’ anchored one and half miles south of Tangalooma Point.  Weather fine but very hot – perfect communication maintained with Marconi apparatus – Marconi pole stripped to refit as it is slightly bent”.

According to Lawrence Durrant  (“The Seawatchers, the Story of Australia’s Coast Radio Service” by Lawrence Durrant. ISBN 0 207 15 198 9) Gayundah been exchanging Wireless Telegraphy signals with the Stores Depot at Kangaroo Point since 1900.

The honour, he says, of being the first ship “at sea” in Australian waters to transmit signals to shore belongs to HMS St George (18th May 1901).

If correct, Gayundah‘s 9 April 1903 message may be the first message regarding as being from an Australian ship “at sea”.

As one of our correspondents points out, this may be further clouded by the definition of Moreton Bay as a pilotage area.  If you are in the bay, are you technically at sea?

Whatever the case, Gayundah was certainly one of the earliest wireless telegraphy equipped ships in Australia.