The Queensland naval brigade companies were raised in most major centres along the Queensland coastline, Brisbane, Maryborough, Bundaberg, Gladstone, Mackay, Townsville and Cairns, with a detachment on Thursday Island. being the major areas.

In 1900 the Queensland naval brigade was invited to participate with the New South Wales and Victorian naval brigades to form a contingent to assist the royal navy to put down the Boxer Rebellion in northern China; this campaign was to be called the 3rd china war of 1900. Due to funding cuts by the Queensland government of the day the brigade did not participate in the campaign, but many members travelled south to enlist in the New South Wales and Victorian naval brigade, and served with honour.

The Colonial Forces Study Group (Qld) tell us that more than 20,000 men are estimated to have served in Queensland’s naval and military forces between 1860 and 1901. Unfortunately very few muster rolls or company lists have survived. Officers and Senior NCOs are more often recorded in official documents than other ranks. 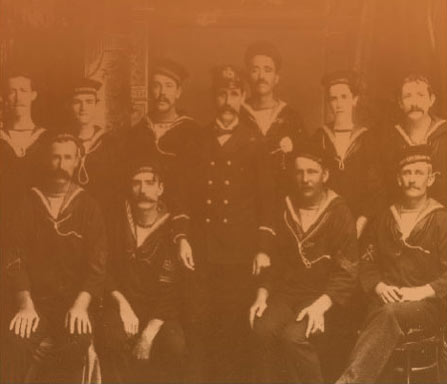 The Permanent Marine Force
served as Officer and Crew of Gayundah. We know that the personnel of the gunboat in 1899 were a skeleton crew of 26, just sufficient for the working of the ship.

Originally many Officers and Crew were in the Imperial Navy but drew their pay from the Queensland Government. 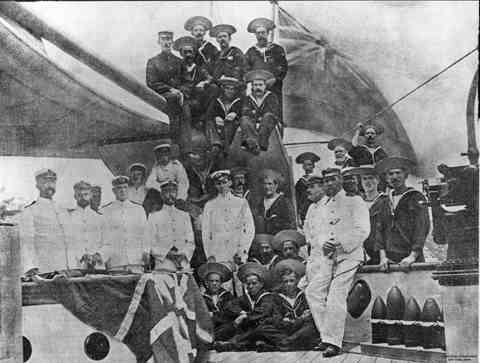 Details of who precisely served aboard Gayundah have proved difficult to locate.

We rely primarily upon mention of names in period newspapers speaking of certain events (for example, the circumstances surrounding Captain Wright’s dismissal was widely reported) and in official documents such as the Naval Gazette.  Of great assistance also is information provided by people who have researched their family histories and found evidence connecting a person to the Gayundah.

The Queenslander newspaper of October 14, 1899 included an illustrated supplement entitled “The Sketcher” and an article Headed ‘Under the Blue Ensign’ with a sub-heading ‘The Queensland Naval Forces’.

As this article provides quite a lot of detail, we’ll let ‘The Sketcher’ tell the story.